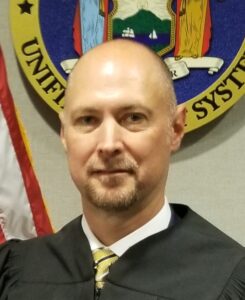 Karl Manne, Town Justice of Herkimer, New York, was sworn in as President of the NYSMA on
September 28, 2021.

Judge Manne graduated cum laude with departmental honors from Hartwick College in 1989 and
earned his law degree from Albany Law School in 1992. He was admitted to State practice in
January 1993 and to Federal practice in June 1993. Later that year he founded the Manne Law
Office in Village of Herkimer, New York, which currently has offices in Herkimer and Oneida
Counties. The general practice firm largely focuses on representing lenders in real estate
transactions while also handling a significant volume of criminal matters, civil litigation in the
NYS Supreme Court, consumer bankruptcy cases, wills and estates, and all other manner of real
estate transactions.

Judge Manne has served continuously as a Justice for the Town of Herkimer since May 2007.
From 2007 through 2011 he also served as Acting Village Justice for the Village of Herkimer,
and from 2011-2014 served as the elected Village Justice. He has been a member of the
NYSMA since he was first appointed to the bench, and has been active in the Association since,
serving as a director from 2013 to 2016 and thereafter as an officer. He has also been an active
member of his county association, having served as an officer since 2013.

In addition to his activities on the bench, Judge Manne has served his local community as Village
Attorney for the Village of Mohawk since 2000, as Town Attorney for the Town of Frankfort
since 2013, as Town Attorney for the Town of German Flatts since 2018, and as Town
Prosecutor for the Town of Frankfort from 1997 through 2007. He served as liaison for
Herkimer County to the 4 Department Law Guardian Advisory Committee from 1994 through
2010, and served as a member of the Attorney Grievance Committee for the Fifth Judicial
District from 2011 through 2017. He is a past president of the Herkimer County Bar
Association, in which he remains active. He continues to serve as a member of the NYSBA
Committee on Professional Discipline, having been appointed in 2020, and as liaison to the
NYSBA Council of Judicial Associations. Throughout his career, Judge Manne has also
consistently volunteered his time to serve on the boards of numerous non-profit organizations.

Judge Manne has always been proud of New York State’s town and village justice system and an
ardent advocate for its continuation, including the eligibility of non-attorneys to serve. Having
been born and raised in rural upstate New York, Manne appreciates the value lay judges provide
to their communities and the need which no other system could meet so well. In counties many
of which span well over 1000 square miles, town and village justices make themselves available
24/7 to hear cases locally. They invest countless hours in training and education annually to
ensure that they remain current on the law and qualified to fulfil their duties. It therefore stands
as Manne’s top priority to stand against any attempts to remake our justice system or to diminish
the role town and village judges play therein.